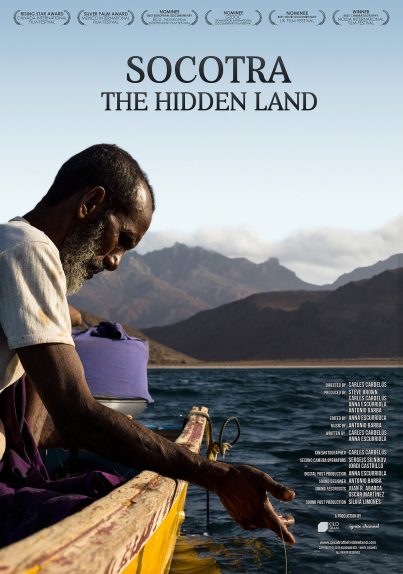 The Documentary Socotra: The Hidden Land is a film directed by Carles Cardelús and produced by Kilogram Box and Ignite Channel.

Socotra: The Hidden Land is a documentary film of how the society of the Socotra Island, Yemen, is emerging from its isolation. This documentary brings to light its daily struggle to preserve their traditions in the face of globalization.
This is the story of a land, whose ancient beliefs and lifestyles remained unchanged for centuries, hidden from the eyes of the world. Every step you take on Socotra is a discovery. To move through its coastal areas and unique landscapes, is to cross a frontier in time, on an amazing journey into the island of Socotra that can be made only once, as the experience the next time will be quite different.
The documentary is a reflection of the life and customs of this isolated society, told by some of the most remarkable characters on the island of Socotra, who use their own words, and their own traditional tales, beliefs and ways of life, to tell us about their spirit, their future and their daily struggle to preserve their traditions in the face of globalization.